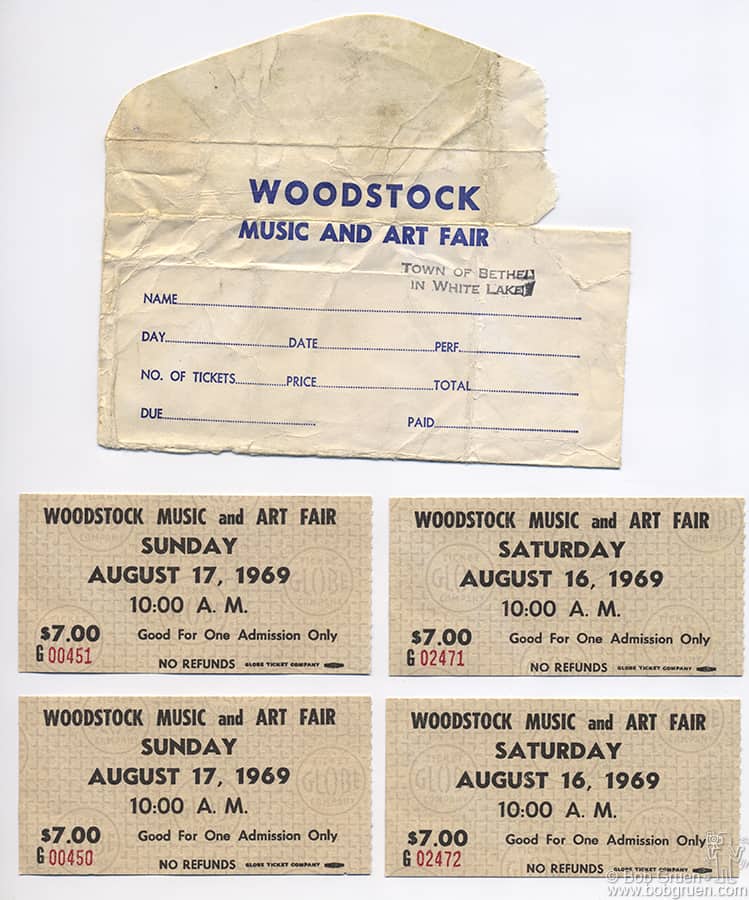 My original set of Woodstock tickets. 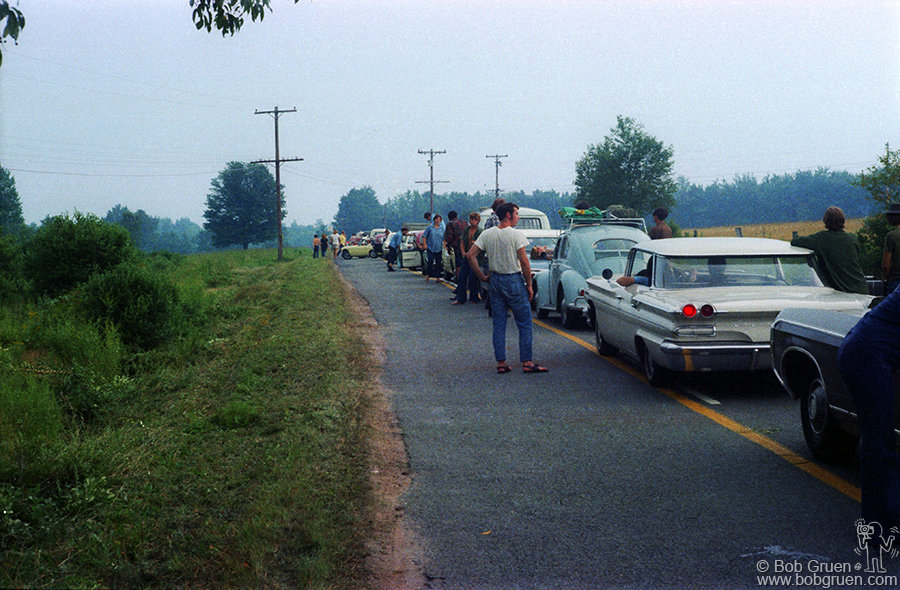 Traffic on the way to Woodstock.

Bob Gruen at The Woodstock Festival in 1969. 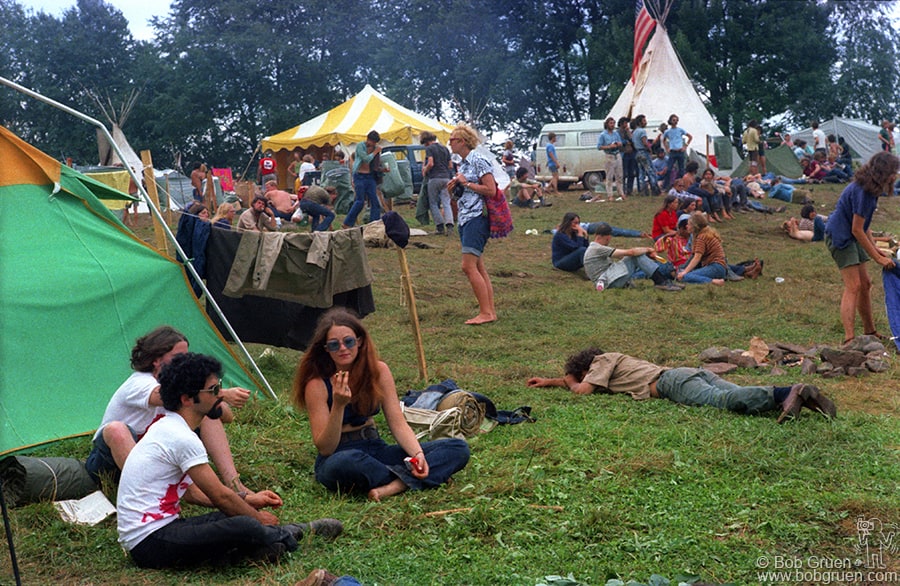 Our campsite at the Woodstock Festival. 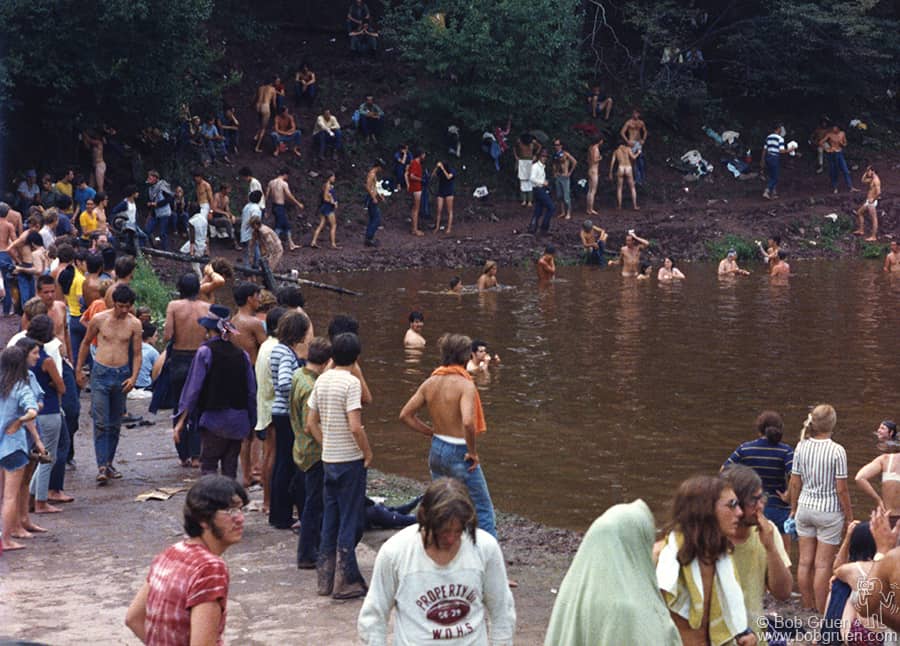 Cleaning up at the lake.

I went to Woodstock because I was a fan of the Who. Sometime in the late spring of 1969, I saw an ad in the paper for the Woodstock Festival “Three Days of Peace and Music”, with a long list of bands that would be playing. In the middle of the list was ‘the Who’ and I was such a major Who fan I knew I had to go. The fact that 40 other bands were playing was also nice but for me it was all about the Who. I mailed a check for a set of tickets for $7 a piece, which it turned out I wouldn’t need – I still have them today.

I made plans to go with a group of my friends and some of them left Wednesday to get an early start on the weekend – I couldn’t go until Friday since I had a job in a photo studio. By Thursday afternoon radio stations were announcing that the site was overcrowded. But Thursday evening my friend Alan called and said it was the most amazing gathering and I had to be there. I told him the radio said it was overcrowded and he said he could save a space for my tent next to his. I asked how I could find him and he said he’d be flying our weirdly colored ‘freak flag’ and that he was next to the ‘Free Food’. I told him I’d probably be able to find the Free Food and then I asked him where he was calling me from and he said there was a pay phone nailed to a tree in the woods near his tent. I thought that was weird but sounded civilized enough and decided we would definitely go.

Friday we loaded my car with the tent and camping gear an we were on our way. Shortly after getting off the main highway we drove up to the back of a line of traffic and proceeded to inch along for the next few hours. After speeding half the day getting only slightly closer, we parked in a field and started to carry our gear in search of the Free Food that my friend was supposed to be near. Being a good camper I had a cooler full of beer, steaks, chicken and a knapsack with cooking pots and things. Somehow we found my friend, set up our tent and started to roam around the festival site. Nobody ever asked for our tickets.

The area in front of the stage was a large hillside completely covered with people – the largest crowd that had ever assembled at that time. At the top of the hill off to stage right was a wooded area with paths running through it and our tent was located on the other side of the woods. In the woods were dealers selling every drug I’d ever heard of (and some I hadn’t) as well as pipes and papers and basically whatever supplies a person needed to get high.

By Saturday everybody was feeling pretty good. The size of the crowd surprised everyone and the National Guard was called in to help. There were several large hotels in that area of the mountains but they were empty since their regular guests either couldn’t get there or didn’t try when they heard the news about the crowds. So that National Guard was able to pick up a large supply excess food from the hotels and bring them back to the Woodstock site via helicopter.

My friends were intent on seeing Janis Joplin so in the evening we went back towards the stage and sat on the edge of the crowd while Credence Clearwater Revival played and after them we saw Janis with her new big band. After her set my friends headed back to the tents. I was waiting to see the Who. By now it was late at nights and getting cold and damp and people were building bonfires. I started roaming around the hillside. When Sly and the Family Stone came on, though I didn’t usually dance, I remember jumping around to stay warm.The people giving out the free food were from a San Francisco commune called the Hog Farm but in spite of their names they were only serving vegetarian macrobiotic meals, mostly rice, beans and vegetables and they were unprepared to cook any meat. The helicopters brought in huge barrels of lamb that had been marinated to make shish kebab and they started giving it away to anybody who had pots and the ability to cook it. That was great for me since in my Boy Scout camping days my specialty was cooking over a campfire. So we loaded up on free lamb and I was making stews and also grilling it on sticks. Lots of people who were walking by stopped and we shared the lamb with them and in return they gave us all sorts of things – I remember getting a gallon of wine and also some pretty good mescalin pills. It probably rained at some point but that didn’t bother us since we could stay dry in our tent.

After a very long wait the Who finally appeared on stage and they were really great! Roger Daltrey had on a suede jacket with very long fringes on the arms and he looked like a bird flying around onstage. At one point in the middle of the show someone (I later found out it was Abbie Hoffman) grabbed the microphone and shouted, “Are we gonna sit here listening to this shit while John Sinclair rots in prison?”. Then Pete Townshend’s boot landed on his back and he sailed off the stage and Pete said, “Next one tries that gets fuckin’ killed!”

When the Who finished I walked slowly back to my tent as the Jefferson Airplane started playing a long jazzy jam and the sky slowly turned from night to day. I stopped and sat on a large rock for a while and I remember watching the girls walking by wearing t-shirts, but obviously not wearing bras! In 1969 this was a very new style, and one I found very exciting!

Later that afternoon after getting some sleep my friends and I decided to go and find a lake we had heard about to take a swim and clean up. We followed a path up behind the stage and over a hill we found the spot – a few hundred people were milling around, some were taking off their clothes and getting in the water. I was very shy at first, especially in the presence of a mixed group of my friends, but soon decided to go for it, and several of us took off our clothes and found that we could indeed swim naked in public, without having sex! It was a moment that opened me up to a new sense of freedom.

Then we went back over the hill and sat facing the back of the stage listening to the music and looking at the awesome crowd. The hill on our side was relatively empty with a few people sitting and lying around. A group of tough looking biker types came walking up the path and stopped next to someone who was lying on his back a few yards in front of us. One of the bikers started pushing the sleeping guy with his foot and it scared me to see them bothering him. When the guy opened his eyes to see what was going on the biker said to him, “hey man, you better roll over, you’re getting sunburned’ and that memory has stayed with me as an example of how everyone got along with each other.